Ahmed Patel is a former pupil of Waterloo Road. Ahmed is the school brainbox and is readily taken advantage of by fellow pupils.

Lewis Seddon, captain of Kingfisher house, is the first to take advantage of Ahmed's brains, paying him to do coursework. Janeece Bryant quickly follows suit and does the same. When Lewis and Janeece realise they are both doing the same, Ahmed's safety is threatened with Lewis threatening violence.

Ahmed decided enough is enough and comes clean about the coursework scam which he claimed he was only doing because his father lost his job. Janeece and Lewis are both punished by cleaning graffiti off the school walls. 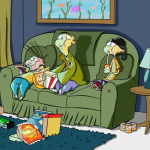